The wake sent by boats and ships when setting out on the water is one of the important factors that determine the condition of the shoreline.

Boaters have a responsibility towards the environment in order to keep it safe and that’s what we’ll share in this article. We’ll talk about what boaters need to do in order to prevent erosion on the shoreline.

The human influences are the most rapid ones and it’s caused by human activities on the shoreline, it’s also called “Accelerated Erosion”. It occurs faster than natural influences (water influences and land influences).

Not only does it happen faster, but it’s also the most difficult one to reverse, sometimes in an attempt to prevent shoreline erosion, but boaters can also end up causing more damage to the shoreline.

The environment is affected and if there are properties and vegetation nearby, they’re the ones affected the most. If there is also aquatic life, they will be affected negatively. On another note, the shoreline is where individuals tie their boats.

If the area is eroded, boaters will find it difficult to tie their boat until it’s reversed which might require occupying more land area and will cost a lot in terms of money and damages.

If Operating Your Powerboat Near A Shoreline, What Should You Do To Help Prevent Erosion? 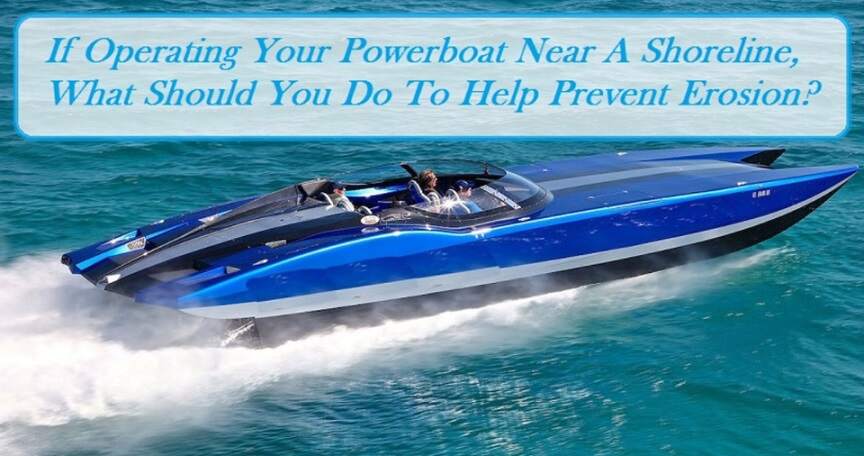 The best thing to do when you’re at the shoreline is to maintain the wake speed. Wake is the main cause of erosion near the shoreline and it’s rapid when the wake speed is high. You want to reduce the speed and ensure you’re not deviating in the counterclockwise direction.

Maintaining the wake speed means reducing the boat speed when setting out on the water and when you’re approaching the shoreline.

Most vessels come with the option to reduce the throttle to “No Wake ” speed, you need to switch to this speed when you’re approaching the shoreline, this plays an important role in preventing erosion.

This is the second action you can take in order to prevent shoreline erosion. The reason why you want to avoid this is to avoid pump or prop intake which will result in stirring up bottom sediments or end up destroying aquatic life and plants.

Larger vessels have a more negative impact while operating in shallow water and hence it’s recommended to avoid approaching such areas. If you have to, make sure to reduce the wake speed as low as you can, the “No wake” speed is the recommended speed as mentioned above.

Drain The Bilge Before Leaving The Waterway

When operating your powerboat these are some of the measures you can take, there are still other human activities that cause erosion at the shoreline.

In order to protect the environment, some regulations were made to ensure that boaters are not causing damage to the shoreline. Let’s take a look at the common regulatory zones that will help protect the shoreline;

Is It Illegal To Move At High Speed Or Create A Large Wake?

Yes, it’s illegal and in most states, you’ll be fined for it especially if there are regulations with signs mentioned. Suits can be filed against you when you fail to abide by the regulation, you’ll be sued based on the damages caused by the operator. Some of the elements that will be considered include the following;

Read More: Under Federal Law, Which Type Of Boat Must Have A Capacity Plate?