A regulatory marker (Also called Information Marker) is designed to serve as a direction to boaters, and also alert them on dangers that are on the path they’re sailing to. These markers are signs and symbols and are mostly drawn with orange color on a white background.

They will help you stay safe, there may be rocks on the way or any underwater hazard you hardly know of, the signs will guide you. As mentioned, they serve as a guide to direct users to the destination just like your normal road signs.

Rocks and underwater hazards are the most popular cause of accidents and hence you want to stay away from them at all costs. We’ll talk about the marker used to warn boaters of rock and other underwater hazards. We’ll also talk about other important markers that will keep you safe while boating on the river or sea.

See Also: Which Symbol On A Regulatory Marker Is Used To Mark A Swimming Area?

What Are Regulatory Markers Used For? 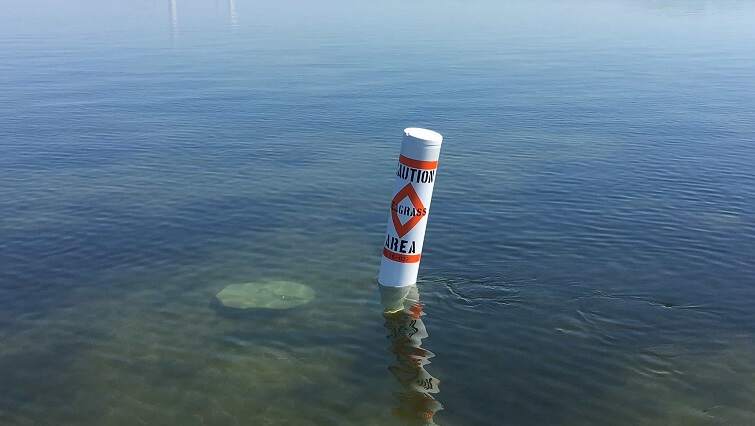 Looking at the uses above, we can group regulatory markers into four.

What Is A Regulatory Buoy?

It’s a regulatory marker that provides navigational direction and information to the boaters; it can also be used to identify restricted or dangerous areas. There are lateral markers which are special channel buoys indicating safe water zones.

The Symbol Used To Warn Of A Rock And Underwater Hazard 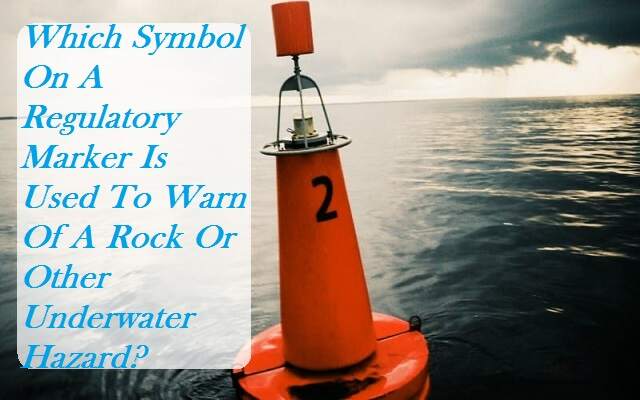 Orange diamond is used to warn boaters of a rock or underwater hazard, once you notice this marker it means you have to reduce speed because there are rocks ahead or a dangerous underwater hazard.

The Marker That Indicates Safe Water On All Sides

If the water is safe on all sides, you’ll notice a red vertical stripe against a white background color. It means you can move around the water in all directions without any danger, they’re passable in all directions, and they represent mid-channels of fairways. They’re safe water markers and you want to make sure that you find them in your direction.

These are orange squares; they’re also called information buoys. From the name you can see they offer information. They’re designed to display information like distance or direction, they can also tell the location you’re currently at.

They’re mainly used to let you know the rules and regulations, they will cover a range. It’s denoted with a circle; a control marker can read something like “slow 3 MPH” or “Slow no wake” and you just have to abide by the rules or you’ll end up getting fined in that area.

It indicates there is danger ahead and that means you have to be cautious, it will most of the time indicate the type of hazard on the way.

It’s denoted by an orange diamond and as previously mentioned it’s used to alert rocks and underwater hazards. Generally, the marker can be used to notify any hazard which can be shoals, wrecks, dams, or rocks.

You need to keep out of this area when you notice this type of marker, it’s featured with an orange diamond that’s crossed inside.

The area should be avoided, swimming in this area will endanger your life, it can be dangerous wildlife and so on, you shouldn’t cross the boundaries on such areas.

These are the most popular regulatory markers you should be aware of, there are others though, and we’ll take a look at them also briefly.

Other Types Of Markers

The swimming buoy marker is an all-white marker with sometimes a light on it, and there would be a yellow light flash every few seconds. This marker indicates it’s a swimming area, it’s normally a small area linked by buoyant ropes.

The area is almost the same as the size and shape of your typical swimming pool. Even though the area is safe, you should swim with caution.

It’s denoted with black and white vertical stripes; they show obstruction to navigation. They indicate a hidden underwater hazard; an obstruction marker and the shore should not be crossed.

It’s different from other markers, it’s designed with a physical purpose, for tying boats. They’re the type of markers you’re permitted to tie your boat legally, such markers are white attached with a blue horizontal band.

These are some of the regulatory markers you should be aware of, there are still more out there and if you sail often, you need to be aware of them in order to stay safe while boating.

It’s important to respect these symbol markers at all costs if you don’t want to get in danger or end up with fines for not following the regulations.

Read Also: What Is The Main Reason For Assuming The Help Position When You Are Stranded In The Water?