So, What Is The Most Likely To Cause Someone To Fall Overboard? Boating is one of the most hobbies in the world. Furthermore, it has become a successful commercial industry thanks to cruises and fishing expeditions. When you’re out on the water, you’re going to have a great time with the ones you love, but you face immense risks.

There are numerous dangers, but the most common one is that you’re going to fall from the vessel. You can take steps to minimize these risks. As a result, the most vulnerable individual is the one who knows little about the rules of boating.

Remember that people fall from vessels frequently, and it can be big or small vessels. People have fallen from tankers and canoes. In many cases, someone will fall from a small boat because they’ve tried to stand up. They’ve lost their balance and fell into the water. As for larger boats, people have a habit of leaning over the rail. They don’t understand that they could fall over until they do.

What is a common cause of someone falling overboard? 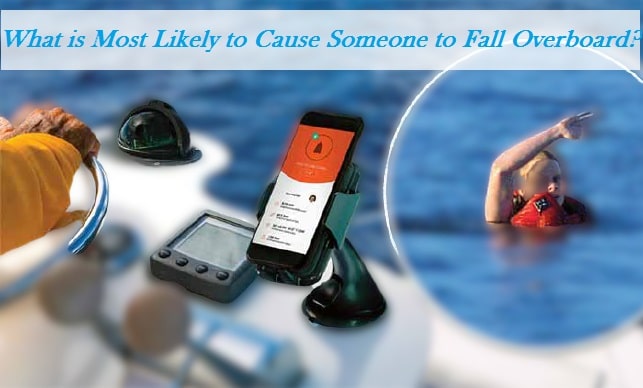 Below, you’ll learn more about the most likely causes of falling overboard.

Why do people fall overboard when boating? Ultimately, the reasons are plentiful. However, the majority of victims were careless. They didn’t understand the risks involved. People don’t understand how dangerous that water and waves can be.

It is pertinent to keep an eye on the boat’s passengers to identify and fix potential problems. For instance, each boat should have at least one person to look for people who have fallen overboard.

Once this person has spotted someone overboard, they can notify the captain and emergency crew. Once they’ve done this, there is a great chance that the individual in question is going to be saved. Many boats are equipped with handholds.

In addition to this, you can try using a boat harness. With a harness, you can stay attached to the boat at all times, so you don’t have to worry about falling off and floating away. Furthermore, you should always keep a hand on the boat. Keep yourself steady to avoid slipping off the deck.

Recommended: What is the best way to roll the PWC to turn it upright?

The Risks Of Falling Overboard

When someone falls overboard, they’re going to experience great risks. It is pertinent to understand what can happen when you fall overboard, so you’ll know what to expect. Just remember that the specific risks depend on the situation at hand.

If you land in the water the wrong way, the risks are high. If you fall from a long distance, you might as well be falling onto concrete. Divers avoid problems by entering the world as straight as possible. It allows them to carefully break the surface without experiencing harm.

Regardless, you may experience serious damage when falling into the water. It could break bones or knock you out.

In some cases, the victim may swallow water, and that can lead to more problems. When submerged in cold water for long periods, there is a risk that you’re going to experience serious problems.

This will make it harder for the people on the ship to track and rescue you.

As mentioned above, being exposed to cold temperatures can lead to big issues. As long as the water isn’t too cold, you’ll likely be okay. You’ll be okay for a short period. However, falling into chilly waters can lead to complications.

For instance, you’re likely going to lose brain function. If the water is cold enough, you may die in just a few minutes. Some of the most common symptoms associated with hypothermia include rigid joints, slow pulse, bloated face, intense shivering, and loss of dexterity.

Suffice to say, you need assistance as quickly as possible. Otherwise, you’re going to succumb.

Unfortunately, you never know what you’re going to encounter in the water. You’re likely worried that you’re going to encounter a shark. However, this doesn’t happen often. Sharks tend to stay in warm waters, so you likely won’t experience them in cold waters. As a result, you shouldn’t worry much about sharks. They normally won’t attack unless you harass them. However, you might experience issues if you get cut and fall into the water.

Rescuing A Passenger Who Has Fallen

It is pertinent to identify the problem swiftly so the problem can be dealt with immediately. As soon as someone falls overboard, the other passengers should let the crew know. It is important to let others know that someone has fallen overboard. Once everyone has been alerted, they should keep a close eye on the person in the water. This reduces the likelihood that they’re going to lose them.

The surface of the water isn’t calm, so keeping track of the person will prove to be difficult. The person who fell can be lost quickly. It is even more difficult to handle this problem in the middle of the night. Once you’ve managed to locate the individual, throw them a life ring immediately.

They should be able to grab onto the life ring so they can be saved. The life ring serves two purposes. It helps save the individual and it helps keep track of their location. Once the crew has learned that someone has gone overboard, they can turn the ship around to help rescue the individual.

This can be harder for larger vessels because they won’t turn around easily. Instead, the crew should depart on a smaller vessel. Once they’ve rescued the individual, they can return to the boat immediately.

How To Act After Falling Overboard

Once someone falls overboard, they need to know how to handle the situation. First and foremost, the overboard passenger needs to remain calm. Failing to do so could lead to big issues in the long run. Don’t try to swim since this will only wear you down. Instead, you need to remain calm and let your body float in the water.

Learning to stay calm will make a world of difference when experiencing such issues. It is a good idea to lie on your back with your head floating above the water. Doing so can help you save energy. You’ll want to assume the dead man’s float so you can stay above the water and avoid overexerting yourself.

First and foremost, you need to take a deep breath before placing your face beneath the water’s surface. Then, you need to relax your body and allow it to hang in the water. When you need to consume more air, lift your head. Breathe in and let your arms float in the water. Then, you’ll want to inhale and exhale along the way.

Even if you fall overboard, there is a good chance that you can survive as long as you remain calm. Make sure that you stay calm and follow the advice provided above. As long as you do this, you’ll likely be okay. One man survived after spending 29 hours overboard. If he did it, you’ll be able to do the same.

At the end of the day, you’ll want to do everything you can to avoid falling overboard. To achieve this goal, you should use the tips provided below.

When traveling on a boat, it is pertinent to know where the personal flotation devices are located. You need to learn how to use these devices as well. Boat operators should pay close attention to the Coast Guard requirements. Doing so will make a big difference in the long run.

Furthermore, the operator should have a plan for dealing with such issues.

Related: What Is The Main Advantage Of Type IV PFD?

Whether you’re on a sailboat or speed boat, you should remain sitting until the boat has stopped. When moving around on a boat, it is a good idea to maintain a firm grip on the rail at all times. Doing so will keep you upright and out of the water.

To avoid problems, make sure that you’re careful when getting close to the edge of the boat. Do not drink alcohol and get close to the edge. If it is going to be windy or stormy, you may want to stay away from the deck.

Finally, don’t argue near the edge. Doing so could lead to a fall. Be cautious and enjoy your trip.