Shotguns are commonly used for hunting games and practicing shooting. They are also fairly commonly kept in houses and cars as self-defense firearms.

You might have heard of shotgun chokes before. In this guide, we will discuss what chokes are, why they are used, what shotgun patterning is, and finally answer our titular question: Which Shotgun Choke Has The Tightest Shot Pattern? Let’s start with understanding shotgun patterning first.

What are patterns in shotguns? 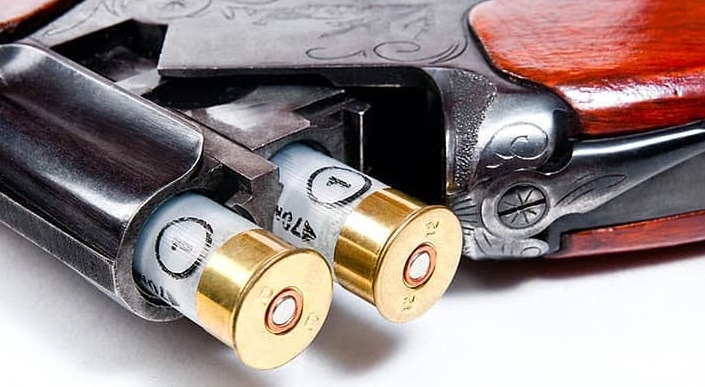 Shotguns use a straight-walled cartridge as load, called a shotshell. The shotshell ejects spall pellet-like pieces that travel through the barrel of the shotgun and get ejected as projectiles through the muzzle of the gun.

The many pellets are spewed out randomly by the gun and there is no telling what design they are going to come out in. When practicing on an artificial target, the pellets seem to form dotted designs.

The dots show exactly where the pellets hit the target. This pattern is called the shotgun pattern. As you can probably guess, the pattern is randomized each time.

One of the characteristics is the density of the pellets within a certain circular area. Normally a 30-inch circle is used for this purpose.

The value is expressed as a percentage. So for example an 80% pattern means 80% of the total load pellets landed within the 30-inch circle.

Another factor worth mentioning is the target range. The range of the target also decides to spread out (less dense) or concentrated (denser) the pattern is.

When the range is greater, the pellets tend to spread out more while they tend to stick together over shorter ranges.

Finally, shooters like to have some control over the pellets. This can be achieved by specially designed tubes called chokes. We shall look at what chokes are next.

Recommended: When Patterning a Shotgun, What Distance Should Be Used?

Many factors affect the final pattern of shotguns. It must therefore be kept in mind that no single factor can completely affect what the shotgun pattern finally will be. The following things greatly affect the patterns of your shotgun:

Simply put, chokes are cylindrical tubes that can be screwed in on the muzzle end of the shotgun. The diameter is slightly smaller than that of the barrel so they can easily be fixed.

Now that you know what chokes are, we discuss what they achieve and how they are designed to achieve it. Chokes, as the name suggests, try to choke down on the pellets that are projected in a shotgun fire.

They are tapered, meaning their diameter from the inside keeps on decreasing as we move out of the gun barrel.

So the pellets coming from the chamber side, which would naturally spread out upon being projected, are pushed closer together, this constricts them and they tend to spread out lesser.

Upon hitting the target, the pattern will show a considerable amount of concentration, whereas not using a choke would result in a completely spread out pattern.

It is often a misconception among new hunters that chokes (because the name seems to suggest it), that chokes decrease the power of your shot. This is simply not true.

The geometry of the choke is designed to not work against the shot but to support and control the shot. The choke constricts the shot pellets and does not obstruct the shot.

An analogy to understand chokes

Shotgun chokes can be thought of as the end of a garden hose. The end of the pipe determines how “cloudy” or how to spread out the water coming out of it is. If we use a lighter hose, the water is more spread out and creates a fountain effect.

On the other hand, if we use a tighter hose, the water will be much more concentrated. This will add to the water density (think of water density as being analogous to pellet density in the case of shotguns).

Many shooters who are new to the game believe that tiger chokes like the full or the extra full (details discussed at the end) think that tighter chokes actually add power to the shots.

This is a very wrong misconception. Chokes do not add power to your shots. And the same way, they can not decrease the power of your shots.

They simply control the thread or the cloud or in layman’s terms, how to spread out the pellet projectiles are once they exit the shotgun barrel.

The garden hose analogy can also experiment at home once, it is encouraged that interested people try it once to have a thorough understanding of the concept.

Almost all hunters use and modern shotguns to support chokes. Without chokes, the cloud of pellets would be without control and would cause too little damage to the target.

However, using an extremely tight choke could cause significant damage to the game and destroy all the meat. It is, therefore, necessary to properly understand the different types of results that chokes can give. Let us look at some commonly used types of chokes.

This choke provides negligible constriction. The pellets tend to form a significantly bigger cloud and as a result, the pellet density is very low.

The pellets get the widest spread in this type of shotgun choke. You probably don’t need this kind of choke if you are looking for a choke.

Only consider using this type of choke if you are getting started with chokes or if your target is unmoving and in a very close range.

As the name suggests, this choke is an improved form of the previously discussed cylinder choke. The accuracy is slightly more improved but the overall spread is still quite scattered.

The improved cylinder provides a 0.25 mm (0.01inch) constriction and is okay for very small to medium range targets that are slow-moving. This type of shotgun choke is great for hunting small games like rabbits or quails.

The modified choke offers a moderate level of constriction to the pellets. The pellet density is greater even at moderate target ranges.

The modified choke provides a 0.51 mm (0.020 in) of constriction. This type of shotgun choke is best for smaller birds like geese or ducks.

These chokes have a high level of constriction. The pellet density is significantly higher even at long ranges and even with moving targets. The full choke offers a 0.76mm (0.030 in) of constriction.

These are specially designed chokes built to hunt turkeys and bigger games. Because these targets require a significant amount of damage for a clean kill, the pellet density has to be higher than the extra full. The turkey choke has a 1.145 mm(0.045 in) of constriction.

The table below can be used for a comparison of different chokes:

Please note that the target range affects the pellet density. The values above apply to a range of 30 yards, for a 30-inch circle.

Recommended: Centerfire VS Rimfire- What is the Difference?

As is clearly evident from the table above, the higher the constriction of the choke, the higher the pellet density. Technically speaking, the turkey choke provides the tightest level of shotgun pattern.

But for most people and most other purposes than hunting turkey, the turkey choke would be overkill.

Are choke tubes fixed or replaceable?

It depends on the shotgun. Some shotguns come with a fixed choke from the manufacturer. In most shotguns, however, chokes are replaceable. You can buy additional chokes and turn your shotgun into a multipurpose gun.

We have quite a bit to wrap up. Firstly, we discussed shotgun patterns. Shotgun patterns are the dotted patterns we get when the projectile pellets hit a target. You will not see such patterns in the actual game, however. These patterns are found on artificial targets.

Secondly, we discussed chokes. Shotgun chokes are cylindrical tubes that can be attached to the muzzle ends. They fit inside the barrel and can be replaced by additional chokes bought from the market should you need to have different kinds of shot patterns. We understood that shot patterns can be controlled by the means of chokes.

Chokes provide a constriction to the projectile pellets which will increase the pellet density, thereby improving the accuracy of your shots.

Having a denser shot allows you to hit farther targets with much better precision, the end kill will of course depends on your own capabilities too.

We now fully understand that shotgun chokes do not add or remove power from your shots, they merely redirect the pellets. Some common questions are being attached here in the form of F.A.Q., they will also serve as tld;r.

FAQ on Which Shotgun Choke Has The Tightest Shot Pattern? 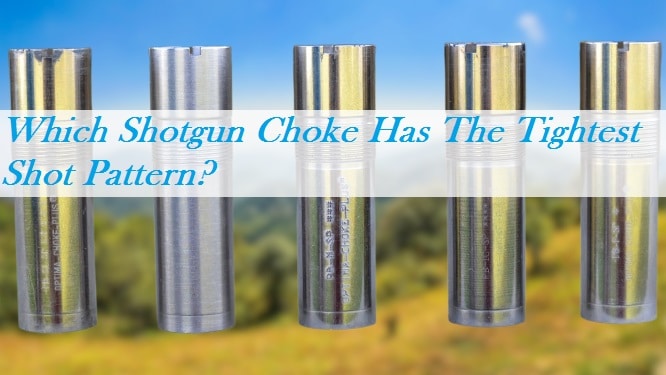 What are shotgun patterns?

The pellet cloud lands on the target and makes a dotted pattern. This is known as the shotgun pattern.

Can two shotguns have the same pattern?

No, shotgun patterns can be like snowflakes. No two shotguns will yield the same pattern.

What are shotgun chokes?

They are simply put, small tubes that attach to the muzzle end of a shotgun. They can be permanent (fixed) or replaceable (unfixed).

What is the use of shotgun chokes?

Shotgun chokes help constrict the projected pellets out of a shotgun. Chokes have a tapered inner edge which grows smaller toward the exit end of the barrel. This pushes the pellets together, increasing the pellet density.

What is pellet density?

Pellet density is a number that tells you what percent of the total load of the shotgun will hit the target. For comparison purposes, it is measured on a 30-inch circle at a distance of 30 yards.

See Also: Which safety guideline for using bows is unique to the crossbow?