What is the best way to prevent propeller strike accident from occurring? The propeller is one of the most important components of a boat motor. Without the propeller, the motor would prove to be useless. The propeller is responsible for transferring the boat motor’s horsepower (HP) to the water, a process deemed “thrust.”

As an important part of the functionality of a boat engine, the propeller must be in good working condition at all times. It is fairly easy to protect a boat motor while in storage. Unfortunately, the same thing cannot be said about a boat motor in operation.

What Piece Of Equipment On A Boat Is Most Important In Preventing Propeller Strike Injuries? 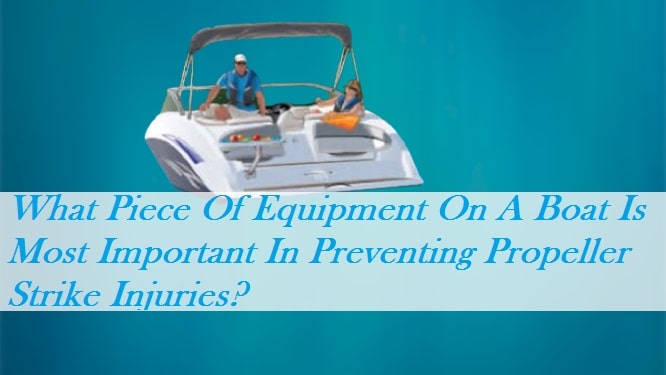 Like the hull, the propeller is exposed to the elements found in water. Long-term exposure to marine elements will result in buildup on the propeller. The buildup will eventually lead to poor performance and a complete malfunction if you do not intervene and intervene quickly.

Anti-fouling paint and epoxy primer are two products that have been proven to fight against marine buildup. With these products in hand, you can keep your engine’s propeller in good working condition.

Unfortunately, these products will do nothing to prevent underwater propeller strikes.

Propeller Strike – What Is It?

When riding in a boat, there is always a risk that you’re going to be knocked overboard. In addition to this, the operator may be ejected from the boat for one reason or another. When this happens, the stern or outboard motor may swing to the other side of the boat.

Then, the unmanned boat will enter the circle of death. This means it is going to move in a tight circle. You likely won’t be able to stop this from happening unless you can climb back on board.

Anyone in the water is going to be at risk of being struck by the propeller. And, they might get hit multiple times. A lot of individuals have been killed in a similar fashion. Co-founder of the Tulsa Bass Club, Vernon Fowlkes, was killed after a boat propeller accident.

It happened after all three of the boat’s occupants were thrown into the water. Another incident took place on Table Rock Lake in Missouri in 1994. It happens far more often than you could ever imagine.

The good news is that there are safety precautions to minimize the risks involved.

Due to the ongoing risks, the United States Coast Guard decided to begin regulating engine cutoff switches on recreational vessels. In 2009, the agency provided documents regarding accidents that took place from 2002 to 2006.

They claimed that many of the accidents would’ve been preventable if an engine cutoff switch had been used. As a result, they implemented the 2008 ABYC which has now become a must for the National Marine Manufacturers Association as well as its members.

Furthermore, the Coast Guard submitted an Advanced Notice of Proposed Rulemaking in June of 2011 while calling for a potential rule that would require operators to wear these switches when operating a boat. The regulations say that all boats need to have an emergency ignition cutoff device or kill switch on the remote steer outboard when the main engine is being used.

In addition to this, the cutoff device had to be attached to the boat’s operator while the main engine is running. The operator should check the switch to make sure it is working properly.

Read Also: Where Is The Best Place To Put PFDs While You Are Out On A Boat?

Boating accidents are more common than most people could imagine. Not only do they lead to a loss of life, but they also cause significant loss. For the Table Rock Lake accident, there were two fatalities. It is estimated that the loss was $9.1 million each.

And, there was one critical victim for another loss of $5.4 million. As a result, the accident led to $23.5 million in losses to society as a whole. The accident led to significant losses for everyone. However, it would’ve been possible to mitigate these losses by using a cutoff switch.

These small switches are inexpensive, but they can greatly minimize the costs of boating accidents. Today, wireless models are available so occupants can attach them to their clothing or swimsuits. These devices are growing in popularity as they become more innovative. They can turn off three or more outboard motors in the blink of an eye.

Boat operators need to understand that there is a new boater safety law. The law was activated on April 1 and all boat operators must follow it today. The new law clarifies that operators of powerboats less than 26 feet in length will need to wear a boat engine cutoff switch while traveling on a plane.

The United States Coast Guard said that too many boat captains were not attaching the switch. They warned that this would create a safety hazard. These devices are designed to minimize the risk of boat-strike injury as well as runaway boats when the operator is thrown overboard.

However, it is important to note that certain activities have been exempted. This includes low-speed activities such as docking and trolling. Also, boaters with a helm in an enclosed cabin are exempt.

Boats who violate the new law could face stiff penalties. Not only are they putting themselves at risk of serious harm, but they may get punished by the Coast Guard too. Even if you only violate the law once, you’re going to be hit with a hefty penalty.

With that being said, it is pertinent to obey this law every time you decide to operate a vessel. In general, boaters who violate the rule will be required to pay a fine between $100 and $500.

Being caught multiple times will cause the fine to increase.

Although most boat operators will need to obey the new rule, there are some exemptions. For instance, there is a chance that you own a boat that was manufactured before 2020. If this is the case, it may not have a cut-off switch. It would be exempt.

Furthermore, the boater is exempt if the boat is more than 26 feet in length or the helm is located in an enclosed cabin. If the boat’s engine has fewer than 3 HP and generates less than 115 pounds of static thrust, the boater would be exempt.

Commercial and government boats are exempt as well. Finally, the boater may be exempt if their boat was made before 2020 and the cutoff switch is inoperable.

Ultimately, boats have many components and many of them are essential. However, you’ll find that the most important components include the rudder, propellers, frame, and shell. Furthermore, you cannot ignore the boat’s chine, tiller, mast, and stern.

These components work together to ensure that the captain can get from point A to point B. However, the most important component for preventing propeller strikes is the ignition safety switch lanyard.