Safety signals have been developed to ensure safety in these situations, they’re sound and light signals you have to rely on in order to drive safely to your destination. Knowing the signals will help minimize lots of accidents and that’s why we’re going to share signals used during times of restricted visibility such as fog.

What Is A Restricted View?

Restricted view doesn’t mean an object has blocked your sight completely, when it comes to boating it means you’re not able to see or be seen clearly.

In other words, it’s difficult to see other boats or ships, and they won’t be able to see you coming as well. You’re also not able to see objects like rocks in front of you, you’ll experience restricted view for basically two reasons;

Poor weather/Fog; When the rainstorms or there is a fog and mist, you’ll experience restricted visibility. Bad weather is the cause of poor visibility during the day, hence it’s necessary to check the weather forecast before setting out on the water.

A lot of accidents are caused by the weather because drivers and operators can’t see clearly what is ahead of them. It’s better to postpone your trip when the weather isn’t good.

Night; This is another factor that leads to restricted visibility, you’ll end up not seeing anything during the night or at sunrise.

Normally, no one will plan their trip in the night, but one might be caught when they experience technical problems on their boats such as when having battery or engine failure.

Extra care needs to be taken in such situations before returning home or at the dock. You’ll end up facing a lot of obstacles at night.

Rules For Operating During Restricted Visibility

These Are Some Of The General Rules That Apply During Restricted Visibility.

When A Sailboat Is Underway In The Fog, What Sound Signal Should You Hear? 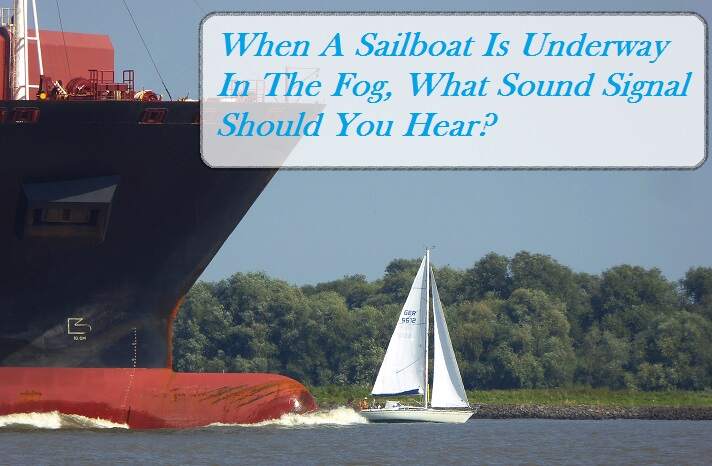 There are both sound and light signals sent when there is restricted visibility and each has a code, let’s take a look at them and the rules that govern them as well.

Sound Signals When Fog Is Underway

Types Of Sound Signals To Send When Fog Is Underway

Basically, you can make a sound on a boat using three different tools and there are conditions for each. Let’s take a look at these sound tools, when and how they should be used to send a signal when fog is underway;

Different Lights On A Boat