How should you hold a handgun for maximum accuracy? Since the release of the Colt, handguns have been a popular firearm used by the police and civilians alike.

Handguns are short-barrelled, generally less than or equal to 65 cm (26 in) in length (as measured along the barrel). Handguns are used by the police and officers as a side weapon and by civilians as a weapon of self-defense.

Given the crime rates in modern societies, it makes sense to carry a handgun for self-defense. Having a deadly firearm in your control puts great responsibility in your hands. Should the gun point in the wrong direction, innocents might die.

Not knowing how to hold and handle a gun properly can cause you damage as well. In this article, we will optimize the grip and position to achieve maximum accuracy. We will first clear some basics of handguns. 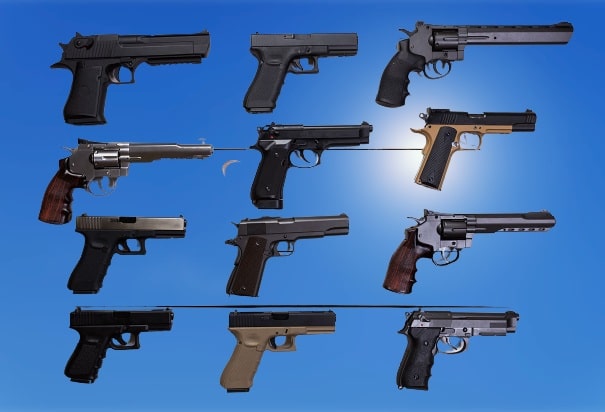 The market for handguns today is full of a variety of guns. We shall look at the two most broadly classified categories and work from there.

The two such categories are the pistol and the revolver.

They are also known as wheel guns. This owes to the central revolver mechanism that might look wheel-like to people who have never seen a revolver before. Revolvers are categorized as repeating guns.

This means that they can be repeatedly fired back to back without the need for manual ammunition reload after each shot. This has made revolvers very popular.

Let us look at some parts of the revolver which are going to help us understand the grip and holding better later on.

Pistols look visibly different than revolvers. The main difference is the revolving cylinder into which the bullets are put.

Pistols don’t have that instead they have a chamber that is integral to the barrel and bullets are separately inserted by the medium of a case called a magazine. Because the magazine can constantly push bullets to the chamber, pistols are also characterized as repeating guns.

In addition to the main parts mentioned in revolvers, pistols have these also:

The final thing we must discuss before we can talk about the grip itself is the recoil.

In the simplest terms recoil is the backward thrust generated as the bullets get fired. The forward momentum gained by the bullets must be balanced back thereby causing the recoil.

Without proper recoil management, even the best of the handgun grips will fail to deliver the bull’s eye shots that you’re looking for.

The recoil pushes the gun upwards and might cause the next few bullets to miss the target. The handgun grip must factor in this recoil force so you don’t have to readjust the gun in your hands after every other shot.

See also: What Is The First Step For Both Loading And Unloading a Firearm?

Some don’ts for maximum accuracy

Most people make the mistake of learning what to do when holding a gun early on but not paying any attention to what should not be done. We are going to look at some don’ts so you’re not making any mistakes and getting perfect shots each time:

(1). A great many people tend to put their less dominant hand under the gun handle, so the gun looks like it’s sitting in a saucer made of the hands. This should be avoided. The problem is, as the gun is fired, the recoil is going to cause the gun to kick up.

Since you don’t have anything to stop the gun from going up (because your less dominant hand is placed below the gun), the recoil goes out of control and might cause the gun to fly from your hands. So remember, no cup and saucer style grips.

When the gun gets pushed up, the entire force is to be contained by the wrist, which is simply not possible because the wrist can freely move in the upwards direction. Result? We have the gun-jumping out of the grip and possibly injuring the wrist tendons in the process.

While this does solve the recoil problem, in that the recoil will be properly absorbed by the shooter’s body and taken care of, it can wound the hand.

The slider racks are back and forth faster than the eyes can see it when the gun is shot. In the grip described above, the skin web between the index finger and the thumb can get caught in the slider and lead to a pretty bad wound.

(4). While this is rare, some people certainly do it: They hold the gun primarily by their weak hand. It will not lead to the best aim and the recoil may cause the gun to fly off your hands even.

Read This: Which Shotgun Choke Has The Tightest Shot Pattern?

How should you hold a handgun for maximum accuracy?

The best way to hold your gun to get the maximum accuracy should be one that checks all of the following points:

Note: Everyone has different-sized hands and no single grip works for everyone. Make sure you hit the range and practice some shots, make minor adjustments, and see what works the best for you.

Now with that out of the way, here is how you should position your hands:

Please ensure that you don’t have a death grip on the gun. What that does is, it makes the index finger tighter and it becomes harder to not shoot and not pull the trigger if needed. So if you’re holding it too tightly, you run the risk of pulling the trigger by mistake.

Just try to have a solid firm grip and you should be good to go. As stated earlier, no single grip works for everyone. These are the basic points which should be kept in mind. The trick is to go out in the range and see what works best for you.

Recommended: Recommended Method for Attaching a Haul Line to a Firearm